On the way to Kandy… the roadside views were amazing!

There were several such street side artwork for sale along the way, and each of them looked absolutely stunning!

Our next stop of Day 1: Temple of the Sacred Tooth Relic

Also callled Sri Dalada Maligawa, it is a Buddhist temple in the city of Kandy, Sri Lanka.

It is located in the royal palace complex of the former Kingdom of Kandy.
The temple complex is huge and the setting serene. It is situated 1630 m (5,350 ft) above sea level with the Kandy Lake in front and the Udawatta forest behind it.

Getting a flower offering for the Temple.

There are several vendors along the gates of the Temple, that offer flower arrangements in various sizes and colors.

The moat that separates the Temple from its outer compound

An ornately embellished passageway in the outer sanctuary.

The temple enshrines relics of what is believed to be the actual teeth of the Buddha.

After Buddha was cremated, his four canine teeth were taken from the ashes. These teeth are regarded as the holiest relics of Buddhism and distributed among various kingdoms, one of them being Kalinga in Eastern India.
When the kingdom came under attack, the tooth relic was taken out of India and into Srilanka for its safety.

A sculpture of Princess Hemamali and her husband, Prince Dantha.
It is believed that the princess carried Gautama Buddha’s tooth relic hidden in her hair to Sri Lanka.

Climbing the wooden stairs, we came to the main room, the Vedahitina Maligawa (Tooth Relic Shrine).

There was a huge crowd of locals as well as tourists offering flowers and prayers here.

Inside this inner chamber is the golden casket which contains the Sacred Tooth Relic.
It is said to be encased in seven baskets inside a bullet-proof chamber. Impressive security! 😉

Huge gold and ivory statues of Buddha adorned the halls on one side of the temple complex.

After offering our prayers and monetary contributions, we headed out of the temple compound and towards a hall nearby.

Next up, the famous Kandyan dance performance.

It is quite a popular tourist attraction and the hall was packed.

Considered Sri Lanka’s greatest cultural export, Kandyan dance was almost lost during the period of British rule due to the cultural domination imposed by the ruling empire.

Good thing it’s been revived because it is one truly captivating show that would be a shame if it were lost.

Kandyan dance is said to have spawned from an exorcism ritual that Indian shamans brought to the island at the request of the king who was suffering from a mysterious illness many years ago.

As the legend goes, the king was experiencing a recurring dream that was causing him much anguish, which he believed to be black magic working against him. After the dance was performed for him, his mystery illness disappeared—and from then forward, the dance flourished.

Though Kandyan dance has traditionally been reserved for men, today women commonly perform it and have adapted their own style of costume.

After the stage performance came to an end, the show continued outside the hall, with daredevil acts of fire play.

That brought us to the end of a long but absolutely memorable first day in Sri Lanka!

All photos are our own and intended for the use of this blog only.

11 thoughts on “A Photo Journey through Sri Lanka – Part 2” 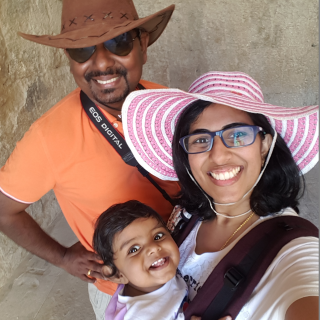 We are an ordinary little family with extraordinary dreams and an unquenchable thirst to explore this beautiful planet! The pages of our passports hold some of our most treasured memories. Through our travel stories and daily experiences, we hope to inspire you to better explore this beautiful world, and make the most of this wonderful journey called Life!

This blog intends to be in compliance with the laws of Dubai and India. No post is intended to be discriminatory or defamatory. Comments on the blog are the views of the person writing the comment and not the opinion of the blog or its author. Reasonable requests to remove/modify any content shall be considered at once. Contact: passportpagestories@gmail.com